As set forth below, there are five tests (§§ 4(a)(1), (2)(i), (2)(ii), 5(a) and (b)) to determine if a fraudulent transfer has occurred. A comparison chart below demonstrates the element of each tests and how the tests differ. However, the vast majority of cases will in practice be decided by one of two tests:

The slang terms for these tests, "Actual Fraudulent Transfer" and "Constructive Fraudulent Transfer", are oxymorons that are not at all descriptive of the analysis that is utilized by the UVTA. In fact, the use of these terms is counterproductive and confusing, and the better practice is to simply drop their usage altogether.

The Insolvency Test of §5(a) by its nature is often resolved on summary judgment, and (rather uniquely as a matter of litigation practice) frequently in favor of creditors. By contrast, the Intent Test of §4(a)(1) is almost invariably disputed (what debtor would admit to cheating creditors unless he wanted the transaction unwound?), leading to significant factual questions of intent, and thus normally precluding the granting of summary judgment.

One might observe that there are really three forms of insolvency tests found in the UVTA, since the Overextending Insolvency Test of § 4(a)(i) and the Sinking Insolvency Test of § 4(a)(ii) effectively amount to "zone of insolvency" tests. With these latter two tests, perhaps the debtor isn't technically insolvent, but if there are certain other factors present then being close to insolvent is good enough.

The Insider Preference Test of § 5(b) is not really a fraudulent transfer test in the classic sense, but a preference test somewhat similar to that found in U.S. bankruptcy law. Recognizing this, some states, most notably California which has its own preferential transfer scheme, did not enact § 5(b) into their version of the UVTA.

IMPORTANT NOTE: For creditors the Intent Test is the least desirable test, to be used only as a fall-back alternative if none of the other tests can be satisfied. Creditors' counsel who are unfamiliar with this body of law will -- due to their inexperience in this area -- almost inevitably start with the Intent Test first, and start floundering around with the Badges of Fraud, which is more often than not the worst way to go about it.

The basic structure and approach of the Uniform Fraudulent Conveyance Act are preserved in the Uniform Fraudulent Transfer Act.
There are two sections in the new Act delineating what transfers and obligations are fraudulent. Section 4(a) is an adaptation of three sections of the U.F.C.A.; § 5(a) is an adaptation of another section of the U.F.C.A.; and § 5(b) is new.
One section of the U.F.C.A. (§ 8) is not carried forward into the new Act because deemed to be redundant in part and in part susceptible of inequitable application.
Both Acts declare a transfer made or an obligation incurred with actual intent to hinder, delay, or defraud creditors to be fraudulent.
Provisions of the new Act, carried forward with little change from the Uniform Fraudulent Conveyance Act, render a transfer made or obligation incurred without adequate consideration to be constructively fraudulent—i.e., without regard to the actual intent of the debtor—under one of the following conditions:
(1) the debtor was left by the transfer or obligation with unreasonably small assets for a transaction or business in which the debtor was engaged or was about to engage;
(2) the debtor intended to incur, or believed or reasonably should have believed that the debtor would incur, more debts than the debtor would be able to pay as they become due; or
(3) the debtor was insolvent at the time or as a result of the transfer or obligation. 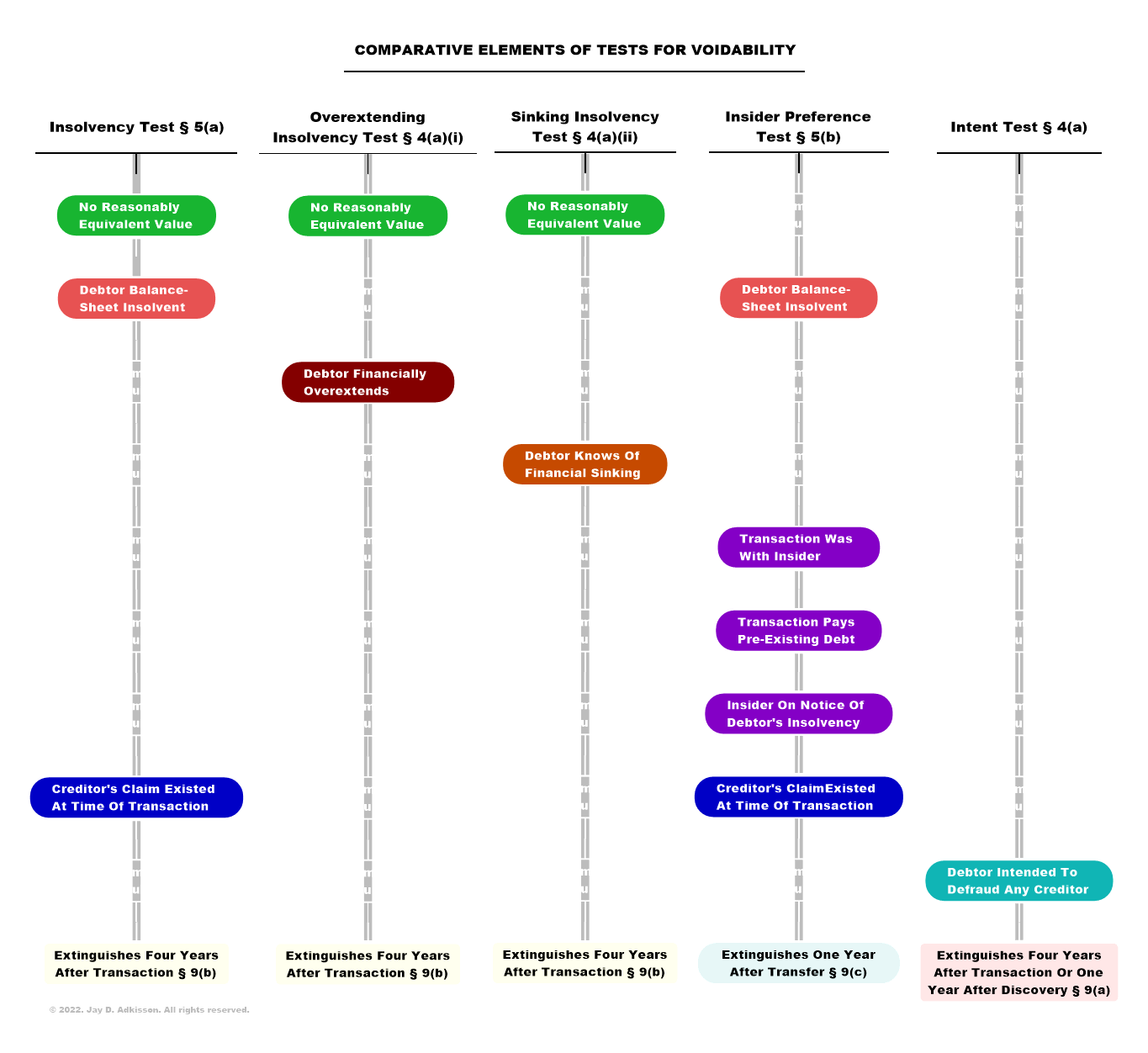 See also Article: J. Adkisson, Understanding The Elements Of The UVTA Tests For A Voidable Transaction, Forbes.com, 30 May 2019.